Transforming a classic Shiny app into a PWA is a game changer for end users. By the end of this chapter, you’ll be able to provide top notch features for your shiny apps like:

Some of the PWA features won’t work with iOS (https://medium.com/@firt/progressive-web-apps-on-ios-are-here-d00430dee3a7), like the install prompt.

Below, we review one by one the necessary steps to convert a shiny app to a PWA. To get a good idea of what our mission exactly is, we leverage the Application tab of the developer tools as shown on Figure 24.1. Alternatively, one may use the Google Lighthouse utility to provide a general diagnosis to the app, as illustrated on Figure 24.2. There are many categories like performance, accessibility. In our case, let’s just select the PWA category, check the mobile device radio and click on generate a report. 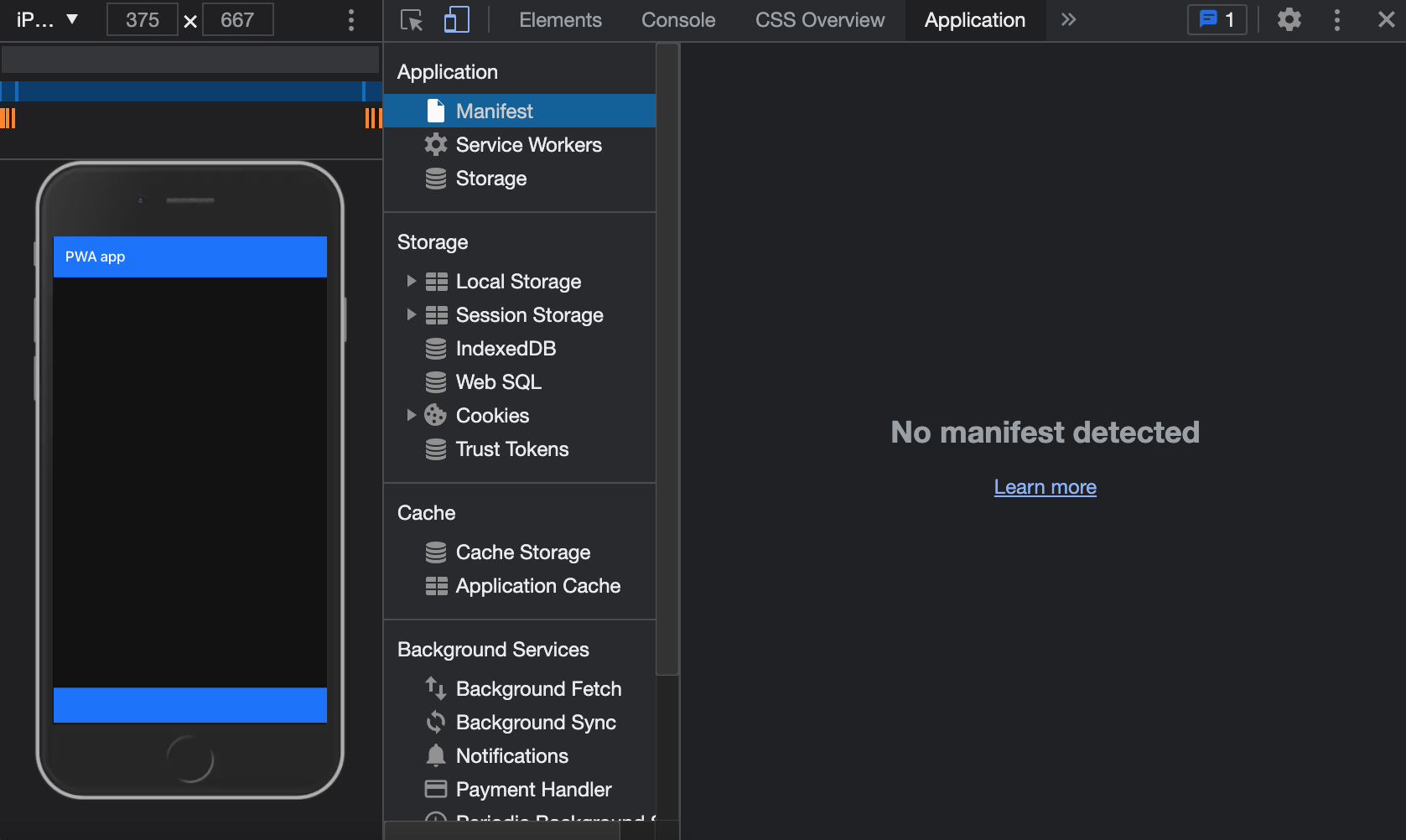 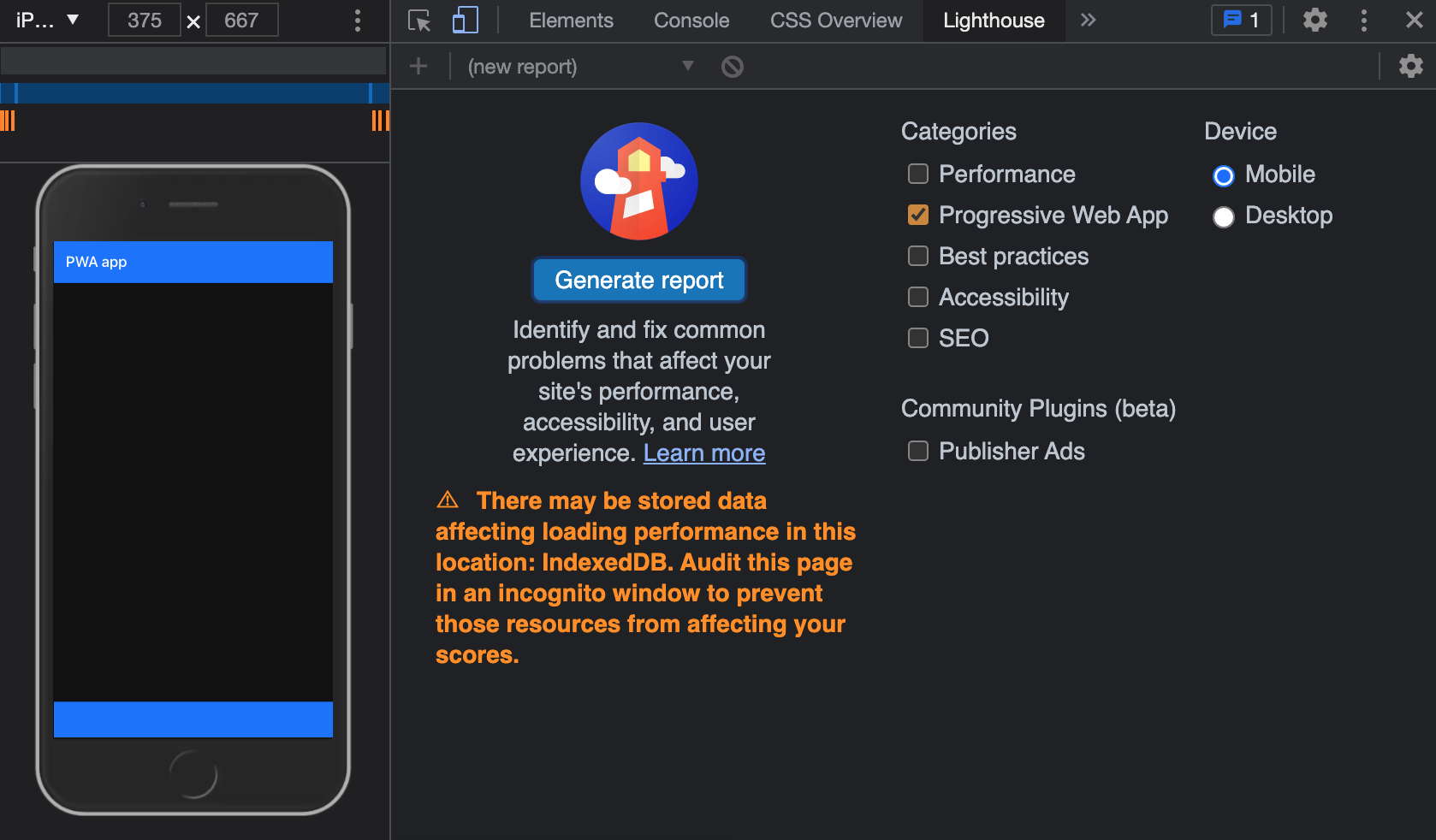 According to the diagnostic result displayed on Figure 24.3, we don’t meet all requirements, most importantly there is: 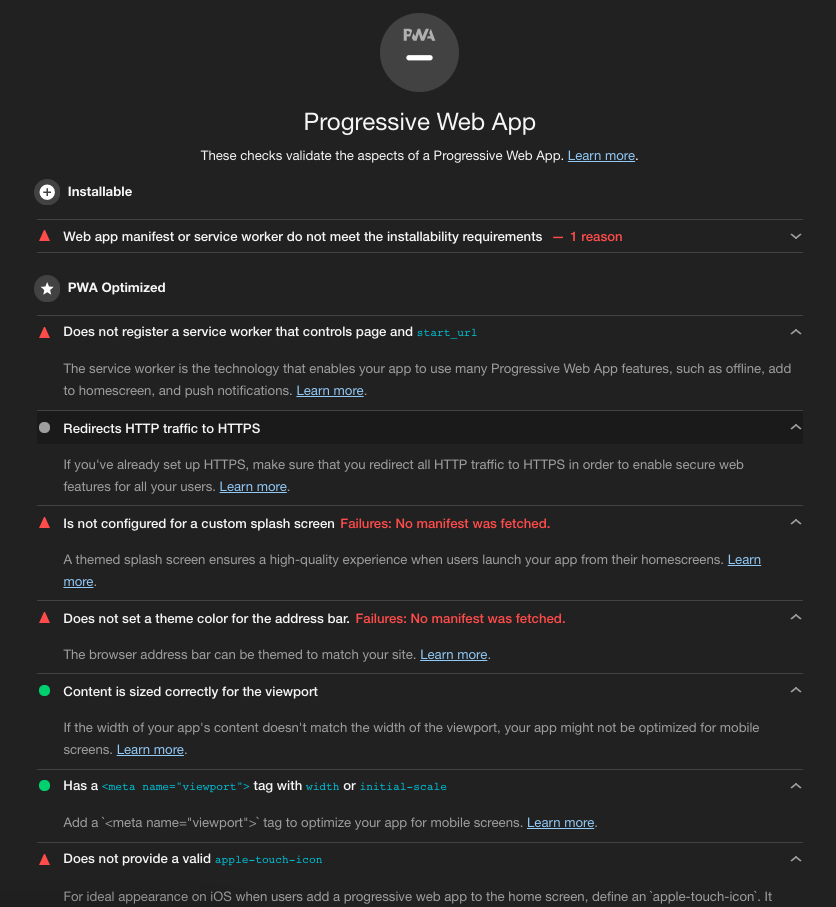 charpente has tools to help design a PWA, particularly the set_pwa() function which does all the previously mentioned steps in only one line of code. There are however a few prerequisites:

Then we set the PWA configuration with set_pwa(). Overall, this function generates a manifest.webmanifest file, downloads the Google PWA compatibility script, adds a custom dependency pointing to the manifest.webmanifest file and a 144x144 icon file, copies a boilerplate service-worker.js with its offline.html page and optionally registers the service worker (whose code is borrowed from web.dev):

In the shinyMobile case, as Framework7 already registers any provided service worker, we don’t need that initialization script. Therefore, to skip the creation of sw-register.js and importing it in main.js, we should actually call:

Importantly, this function does not handle icon creation. There are tools such as appsco and app-manifest, to create those custom icons and splash screens, if you need to.

In the following, we provide more detail about the mentioned steps.

All fields are following the official recommendation provided by Google regarding the PWA, I do not recommend removing any entry, except the shortcuts, described later. Since the state of the art may slightly change in the future, you are encouraged to regularly check this website to get the latest features.

This file has to be accessible by the app, hence best practice is to put it in the /www folder, icon images being hosted in the /www/icons sub-directory. The charpente create_manifest() function writes a JSON file at the provided location. Interestingly the shortcuts fields gives the ability to start the app in a specific state, so that end users save time. This feature is only supported by latest Android devices as well as up to date Windows 10 computers (no Apple support). In practice, the shortcut url can be processed by shiny::parseQueryString on the server side. For instance, if the url contains a query string like https://domain/path/?foo=1, we could show a notification:

The web manifest and icons have to be included in the head before the Google PWA compatibility script:

In practice, since the package already relies on other dependencies like Framework7, we will leverage the add_dependencies() function to add all dependencies at once.

As we use the Google PWA compatibility script, we have to include at least one icon like <link rel="icon" type="image/png" href="res/icon-128.png" sizes="128x128" />. However, we found some discrepancies between the developer tools recommendations and the PWA compatibility script. Therefore, we recommend to follow the developer tools prescriptions, that is to include at least one icon of size 144x144. All other elements are generated by the script itself, which is convenient. Indeed, having to handle all possible screen sizes and different OS is particularly tricky, repetitive, and not interesting.

The HTML dependency is downloaded with create_dependency("pwacompat", options = charpente_options(bundle = FALSE)). Don’t forget to update the add_dependencies() call in f7_page() by including the two new dependencies, that is pwa and pwacompat:

Calling devtools::load_all() and running the app again, you should see the new dependencies in the head (Figure 24.4). 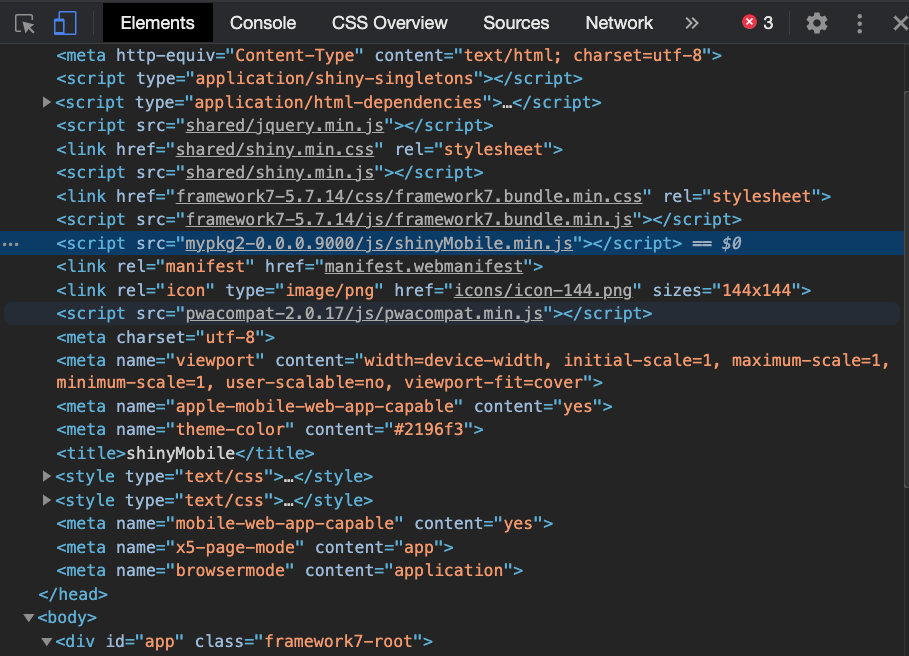 Yet, according to Figure 24.5, we still miss the service worker, as shown in the manifest diagnostic. This demonstrates how powerful are the developer tools as the end user is always guided step by step. 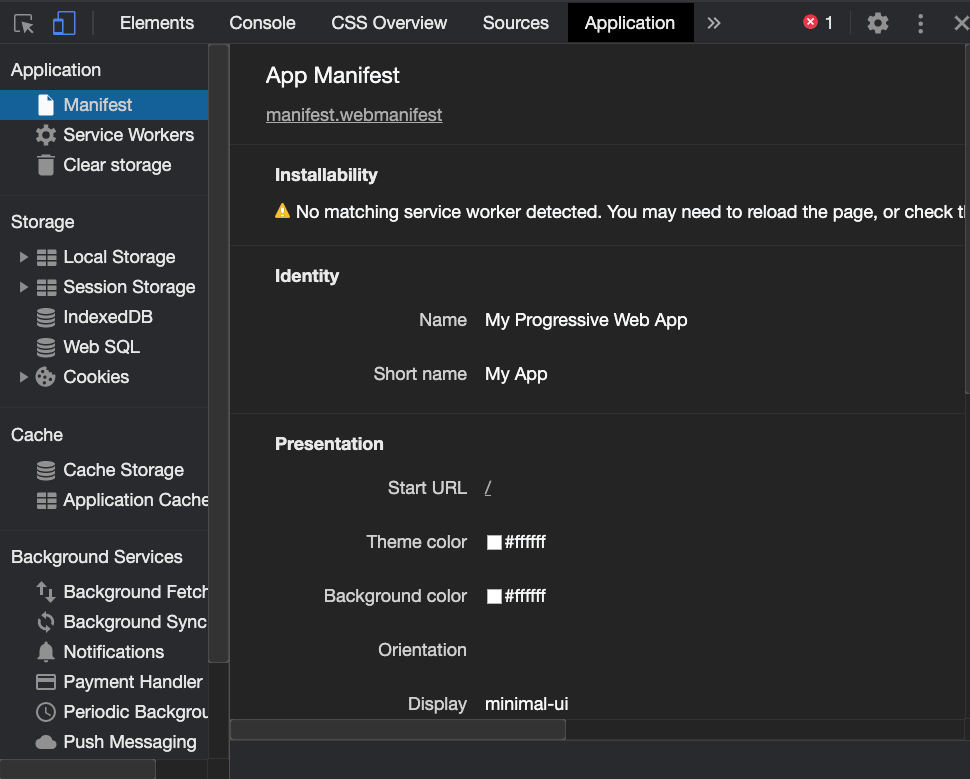 The second mandatory step to make our app installable is the service worker. We borrowed and modified the code from web.dev. set_pwa() copies this code in the the provided app /www folder:

This service worker is composed of three steps, which we succinctly describe below.

During the installation step, the cache is initialized and assets like HTML page (offline.html), CSS, JS, images are asynchronously cached. Assets’s respective path is taken from the server location, for instance, Framework7 assets are located in framework7-5.7.14/... and jQuery assets in shared/. Best practice is to look at the developer tools Source tab which provides the right location.

Once active, the service worker intercepts all network requests sent by the client and returns answers according to a predefined strategy. Here we set the “network first” strategy, meaning we always try to return an answer from the network and fall back to the cache if the request failed (for instance in case of missing internet connection). In the above code, there are two kind of requests: navigation, that is related to an HTML page and Other requests corresponding to static assets like CSS or JS. Therefore, we have an if and else statement to consider those two cases. If you would like to know more about caching strategies please refer to the Google documentation: https://developers.google.com/web/tools/workbox/modules/workbox-strategies.

Below is the navigation request logic, that is what will be triggered each time an end-user points to your app. As stated above, if the navigation preload is available, we return the preload response. If not, the request is fetched. In case of failure, we fallback to the offline HTML page, cached during the installation step.

All other requests are handled in the else statement. The logic remains the same. We first try to get assets from the network and fallback to the cache upon error, that is for instance in offline mode.

To sum up, this service worker redirects the end user to the offline cached page (offline.html) whenever the app is offline, thereby offering a better user experience. The full code is located here.

We strongly advise to keep the same file names.

The next step involves the service worker registration. Framework7 has a dedicated module in the app configuration. We modify the config in helpers_config.js before initializing the app and run build_js() to update the minified file:

If the process is successful, you get the result shown in Figure 24.6. 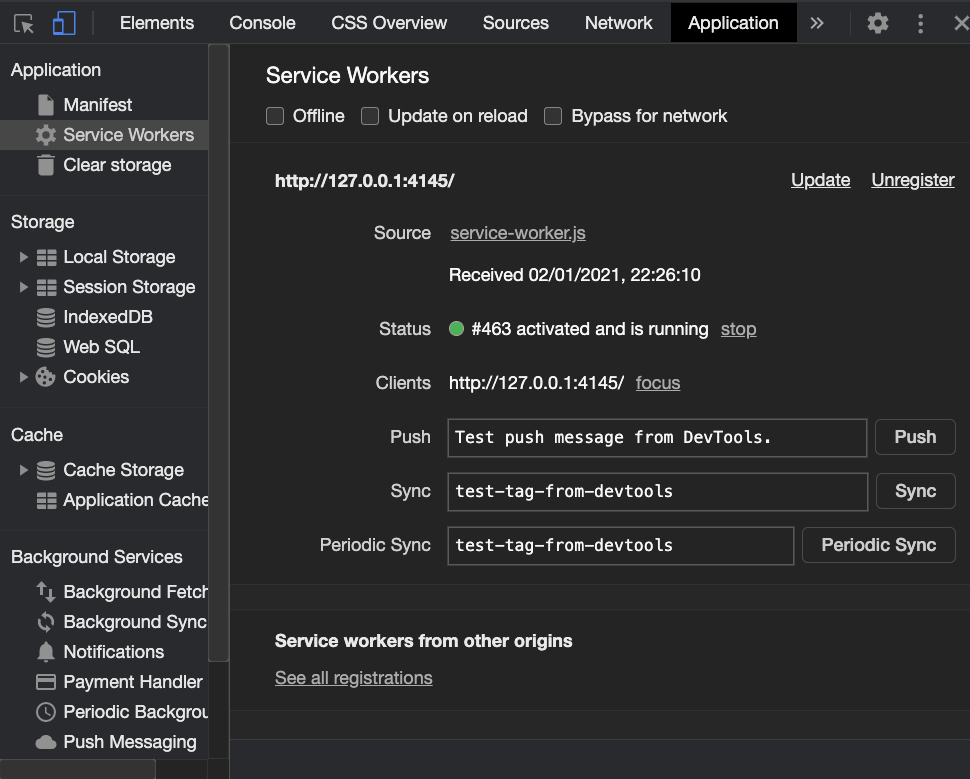 At this point, you should also check whether the service worker was able to cache files by inspecting the cache storage section, as depicted by Figure 24.7. 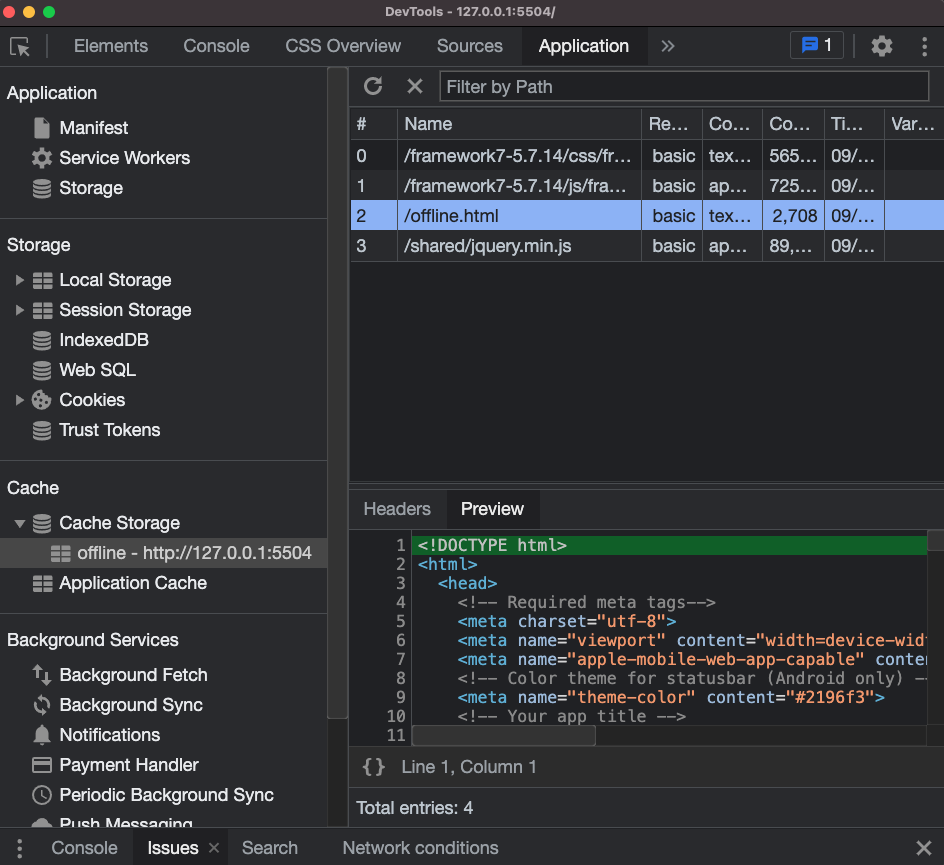 The new PWA standard imposes to return a valid response when the app is offline. The offline page is also copied from charpente and below is a summarized version:

Notice that jQuery, required for easier DOM interactions, as well as Framework7 CSS and JS assets are cached in the above service worker script, thereby making them available to offline.html. This offline fallback relies on Framework7 for consistency reasons but could be replaced by any other HTML page, keeping in mind the update the service worker. The whole code is stored here.

Now, let’s audit our app again: congrats! It is installable and reliable, although further PWA optimization may be provided. 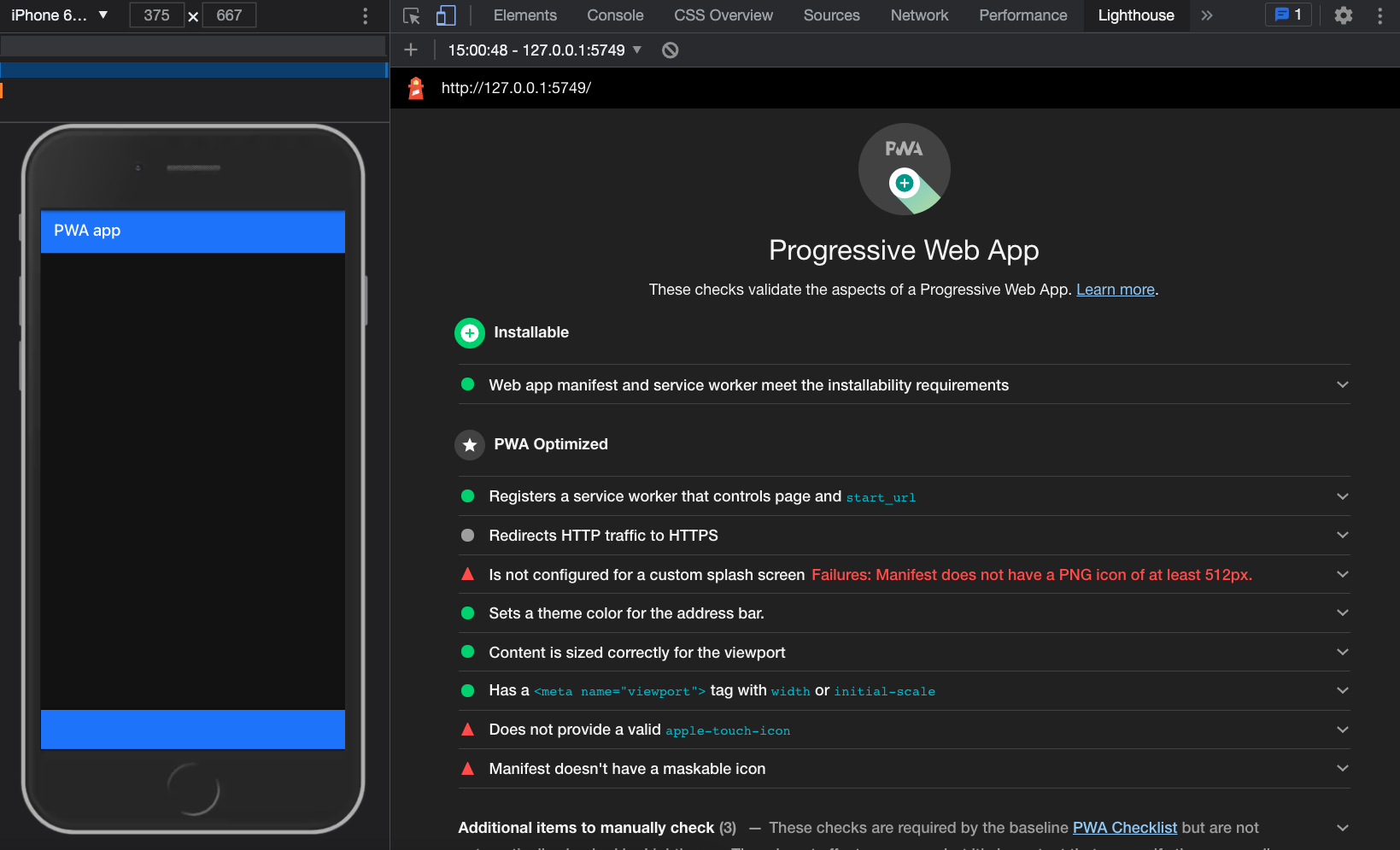 A common source of error is the browser cache. It is best practice to regularly empty it. Alternatively, one may runs in incognito mode, which does not cache files.

With the above approach, shinyMobile will always look for a service worker to register. Particularly, this would raise an error in case no service worker is found on the server. What if the user doesn’t want to create a PWA, let’s say for less important applications? We may add a parameter to f7_page(), for instance allowPWA, that is either TRUE or FALSE, store its value in the body data-pwa attribute.

We recover it on the JS side within helpers_config.js:

It only creates config.serviceWorker if the user specified allowPWA = TRUE.

It is a great opportunity to propose a custom installation experience.

To be able to install the app, make sure to replace start_url by the url where the app is deployed like https://dgranjon.shinyapps.io/installable-pwa-app/ for instance. Missing that step would cause an issue during the service worker registration.

We create a new script with create_js("helpers_pwa") and export the setPWA function:

Once the installation criteria are met, the web browser raises the beforeinstallprompt event, (except on the iOS platform which is not compatible yet. We add an event listener inside setPWA:

This code adds an event listener to the window, prevents it from showing at start with e.preventDefault and captures it in an external variable called deferredPrompt.

The next step comprises the design of our custom piece of UI that will trigger the prompt install. We can benefit from the rich Framework7 interface and display a toast containing an install button. The initialization is fairly simple, following the pattern app.<COMPONENT>.create(parameters):

We give it an id so as to call it later and edit the beforeinstallprompt event listener to show the toast:

With jQuery like $(window).on('beforeinstallprompt', ...), we would capture the event with e.originalEvent.

We register a second event listener, which fires on the toast button click. We first close the toast, call the prompt method on the deferred event and log the result:

Inside init.js, we add our brand new module:

We run build_js() and deploy the app to shinyapps.io (remember, we must serve the app under HTTPS). Figure 24.9 illustrates the install prompt window that appears to install the app. Once installed, the beforeinstallprompt event does not fire anymore and the app may be launched as a standalone app, for instance on macOSX (Figure 24.10). 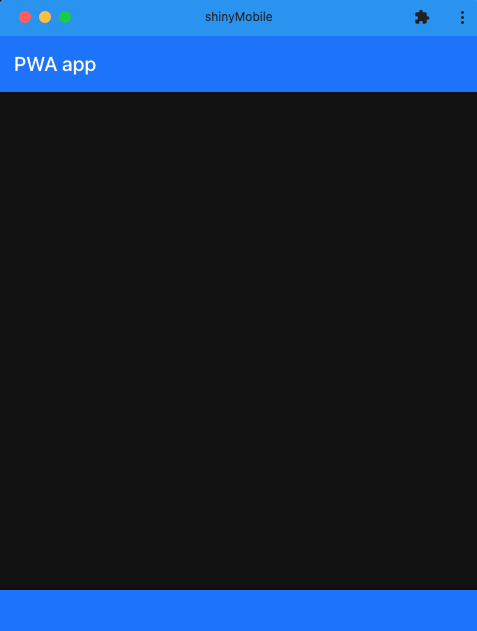 On Figure 24.10, the blue window color corresponds to the tags$meta(name = "theme-color", content = "#2196f3"), passed in the f7_page() layout element. To simulate a network issue and validate the offline mode, we selected the developer tools Network tab and changed the dropdown value to offline. As shown on Figure 24.11, the offline template shows and pulls static assets from the service worker (in red are shown the failed network requests). 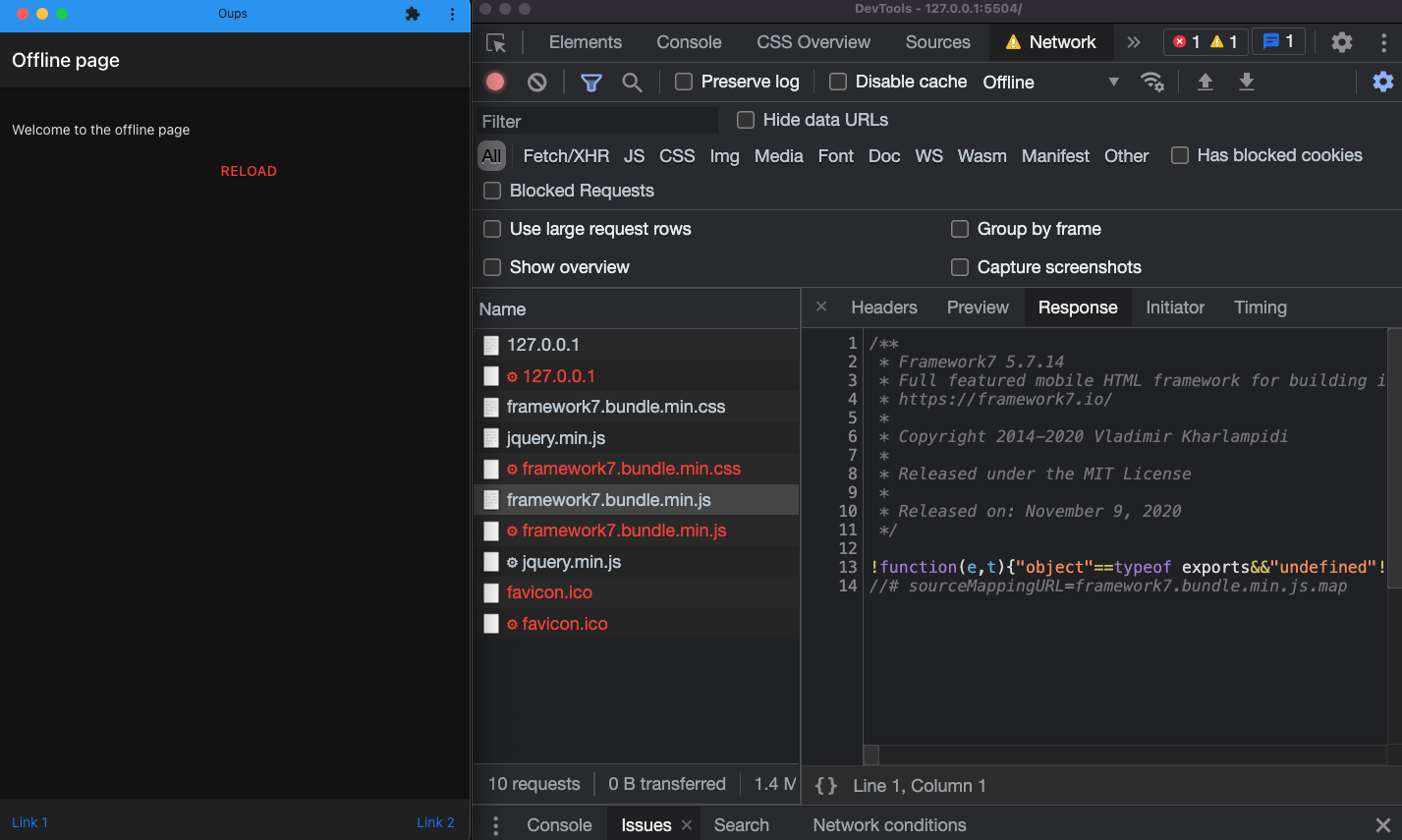 The final product may be run with:

This chapter was part of a workshop available here.

The process described above works perfectly for any Shiny template. The reader may also consider other packages like {shiny.pwa}, that creates a PWA compatible structure at run time, within the app /www folder.